* In case of any delay in receiving the OTP, you may verify it later. Please proceed without verification.

Enter your City name or Pincode

Located in the Ludhiana district, in the heart of the state of Punjab, Machhiwara is a small town, with a rich and tumultuous past. This small town owes its name to its past when it was a small fishing village on the banks of the mighty river Sutlej. Today, the town of Machhiwara is at a distance of about 13km from the Sutlej and is a Nagar Panchayat. 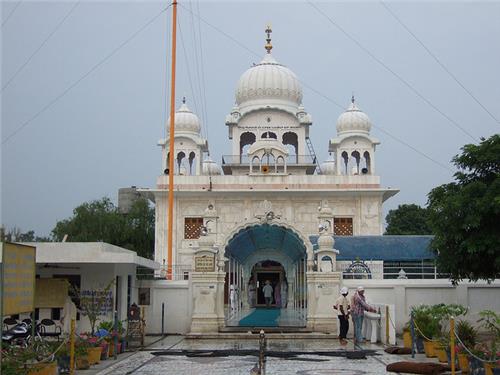 Machhiwara has its own share in the history of Punjab. It was here that the tenth Sikh Guru Guru Gobind Singh Ji came to rest in the last phase of life. When Aurangzeb's army invaded Chamakur, Guru Gobind Singh Ji had to flee to avoid being captured. After making an arduous journey from Chamkaur through thorny forests, Guru Gobind Singh Ji came to rest and slept outside the village of Machhiwara where he was joined by his three disciples Bhai Mani Singh, Bhai Daya Singh and Bhai Dharam Singh who had separated on their journey. When the Mughal army received word about Guru's presence in the region, he was aided by two of his disciples who were Pathans from Afghanistan; Ghani Khan and Nabi Khan. They disguised Guru Gobind Singh Ji as a Muslim saint to avoid the watchful eyes of Aurangzeb's army. As some legends hold, Machhiwara is also said to have been visited by Pandavas during their exile. There is a Shiva temple on the Ropard road, where the Pandavas are believed to have spent a part of their exile.

Machhiwara is located abobut 37km north-east of the city of Ludhiana. The geographical location of Machhiwara is 30.91°N 76.2°E and is situated at the height of 262 metres (859 ft). From the state capital of Punjab, the distance to Machhiwara is 69km. It is 9km from Samrala, 40km from Chamkaur Sahib and 25km from Rahon. The topography of Machhiwara is in tune with most of the Ludhiana district, which represents the alluvial nature of its land, owing to the aggravation work of the Sutlej river. The alluvium deposited by the river is carried with the strong winds blowing across the plains and sand dunes and mounds are created consequently. The farmers have to work in adverse conditions, but due to their commendable efforts, the sand dunes are flattened as they are naturally created.

Machhiwara was declared as a Nagar Panchayat, replacing the Gram Panchayat through a notification by the Punjab Government in November 1977. The Nagar Panchayat consists of 13 wards. Administratively, the town of Machhiwara is a Sub-Tehsil and has the offices of Naib – Tehsildar, Nagar Panchayat, Block development of Panchayat officer, Child development Project officer, Post Office, Market Committee, Police Station, FCI, Punsup, Food & Civil Suplies, Punjab State Electricity Board, Telephone Exchange, etc. There are about 4,937 houses in Machhiwara. The Nagar Panchayat provides water supply to the residents and is authorised to impose and collect taxes. The water supply is served through three tube wells installed in the town.

The climate of Machhiwara is mostly dry which is punctuated by a short spell of the Monsoon rains. There are three annual seasons in Machhiwara; Summer, Monsoon, and Winter. The period between Monsoon and Winter are recognised as a post – monsoon transitional period. Temperature during Summers, keeping with the trend in the central Punjab, can be high as 40°C. The summer starts in the later half of March and lasts until the end of June and ends with thunderstorms announcing the arrival of the south – west Monsoon. The Monsoon in Machhiwara is quite short. It lasts between the months of July and September. Machhiwara receives almost 70% of its annual rainfall in this period. November to the first half of March are considered as the months of winter. The temperatures begin to fall in December and it can be quite cold in Jaunary. With the dry wind blowing across the alluvial landscape, the winter can be very bitter and chilly.


Literacy and Language In Machhiwara

Machhiwara is surrounded by a number of villages, irrigated with the water of the Sutlej river. Since the agricultural yield of the region is quite high, there are a number of businesses that work as a support structure to the economy of Machhiwara, which is predominantly an agricultural economy. Machhiwara boasts of a healthy wholesale and retail market as well as has 4 petrol pumps, a gas agency and quite a few banks. The grain market in Machhiwara has about 250 commission agents. The town is also industrially quite developed with a number of factories surrounding the town. There are about 10 rice-shellars in Machhiwara and a cold storgae of an ice factory. In terms of employment, about 8,615 people from the entire population are engaged in work or business activity. In the working population, 7,099 are males and 1,516 are females. Out of the total working population, 92.48 % are engaged in main work, whereas 7.52 % of total workers are engaged in marginal work.

The town is home to number of historical gurudwaras such as Gurudwara Charan Kanwal Sahib, Gurdwara Uchch Da Pir, Machhiwara is a religious town at heart. All festivals from Baisakhi to Dussehra are celebrated here with much religious fervor. Since Machhiwara is predominantly one of the important places for the Sikh religion, it's cultural values also carry the spirit of Sikhism.

Although Machhiwara is not a tourist place per se, it is a town of some historically important Gurudwaras. Following are some famous places of interest in Machhiwara.

Gurudwara Charan Kanwal Sahib : Located in the eastern side of the town of Machhiwara, the Gurudwara Charan Kanwal Sahib is a beautiful complex housing the main Gurudwara, a small pond called Sarovar and Sikh Religious Museum. This Gurudwara is built on the site where Guru Gobind Singh Ji had rested after completing his arduous journey through the forests. It was here that he was joined by three of his disciples Bhai Mani Singh, Bhai Daya Singh and Bhai Dharam Singh. An annual congregation fair is organised here every year in December. These days are known as ninth and tenth of Poh, the days when Guru Gobind Singh had stayed in the town of Machhiwara.

Other places of tourist interest in Machhiwara include Gurdwara Uchch Da Pir which was built to honour the two Afghan disciples of Guru Gobind Singh, known as Ghani Khan and Nabi Khan, who successfully hid him from Aurangzeb's army. Another Gurudwara which attracts a number of devotees and visitors is Gurdwara Chubara Sahib. It is built on the historical site where once the house of Gulaba Masand stood. It was in this house that Guru Gobind Singh had spent a night. For administrative purposes, the Gurudwara is affiliated to the Charan Kanwal. Machhiwara also has three parks near Indira Colony, Dashmesh Nagar, and the Bus Stand which are ideal spots to head to with your family for a short picnic.

Although Machhiwara is a wonderful town loaded with religious history, unfortunately there are not any well known hotels in the town. If you are planning a visit to Machhiwara, whether on official duty or with your family, you could plan your stay in any of the hotels in Ludhiana. Since Machhiwara is only about 37km away from Ludhiana, you can make a day trip easily. Ludhiana offers a number of hotels in each category.

Travelling in less known towns, or rural areas in India can turn out to be quite adventurous if everything goes right. However, things can go terribly wrong if you have an emergency, or have to make a sudden change in the plans. Although Machhiwara is semi-rural place, like the most of Punjabi small towns, it offers a number of utility services to its residents as well as visitors. From post office to police, clinics, the tourist can take solace in the knowledge that help is just around the corner.

Punjab is a fairly safe place for the visitors. Since it is a well-developed state with better infrastructure than many other states in India, it also has a good presence of police in almost every nook and cranny of the state. Following are the details of the police in Machhiwara should you need to contact them for help. There is a police station in Koom Kalan near Machhiwara.

As Machhiwara is quite a small town, it does not have a large number of banks operating in the town. However, to cater to the needs of the local economy and customers, there are a few banks that have opened their branches in this small town.

Health concerns are always a great worry when we travel on the roads less travelled or the cities in the rural and remote places. However, in spite of being a relatively small town, Machhiwara has a fairly good healthcare infrastructure. Following are some of the clinics and hospitals in Machhiwara.

There are two other hospitals in Machhiwara, namely; Sembhi Hospital and Surjit Clinic.

As Machhiwara is not as well equipped in terms of civil facilities or public utility services, as big cities in the region. Unfortunately, there are no private courier companies in Machhiwara. However it more than makes up for the lack of a private courier service with the Indian Post.

Machhiwara lies to the east of the Ludhiana town at a short distance of 37km and is adjacent to the NH1. From Chandigarh, the capital city of Punjab, Machhiwara is about 69km. Many buses ply between these cities, however, since it is a little way off from the NH1, the frequency might be an issue.

By Train : Machhiwara does not have a railway station and the nearest one is in the nearby town of Samrala. If you wish to travel to Machhiwara by train, it is a good idea to take a train to Ludhiana and from there you could reach Machhiwara by bus or a rented vehicle.

By Air : Chandigarh Airport is the nearest Airport to Machhiwara and is at a distance of around 78km.. The airport has domestic flight terminal. Daily flights fly to the major Indian cities Delhi, Mumbai, Bangalore and is 176km from Machhiwara. Taxi services can be arranged at the airport to reach Machhiwara.

Comments / Discussion Board - About Machhiwara